The Institute of Indigenous Medicine of University of Colombo which has been postponed by the Institute will be re-started from 21st April 2014.

The 2nd year students who have to repeat the above examination should be sitting as per the relevance.

Hostels will be opened only for above mentioned students who are accommodating hostel facilities from 20.04.2014.

The vacation which has already been announced for other batches till 31.03.2014 will be continued until further notice.

For more details see below image 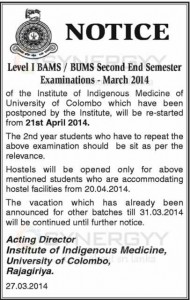